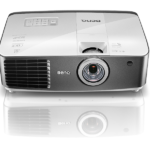 Projectors have been used in homes, offices and schools for a very long time and have maintained their position as one of the most sought after electronic apparatus throughout the country.

A projector or image projector is generally an optical device that projects an image (or moving images) onto a surface, commonly a projection screen. Most projectors create an image by shining a light through a small transparent lens, but some newer types of projectors can project the image directly, by using lasers.

A virtual retinal display, or retinal projector, is a projector that projects an image directly on the retina instead of using an external projection screen. The most common type of projector used today is called a video projector.

The newest types of projectors are handheld projectors that use lasers or LEDs to project images. Their projections are hard to see if there is too much ambient light. Movie theaters use a type of projector called a movie projector. Another type of projector is the enlarger, a device used to produce photographic prints from negatives.

Projectors are capable of creating a completely unique cinema experience. They provide the largest possible picture inside a home or they can produce smaller images to replace a normal TV that takes up more room. Compared to televisions, they are reasonably priced for the size, they save more space, and they are very easy to install.

While most worry about the implications of safety when it comes to shopping online, some consumers are under the impression that if they don’t have a credit card, they are unable to shop online even though many websites offer alternative forms of payment.

Viral Audio has top notch projectors for sale and boast of the best brands in the country.

If a big screen TV isn’t just exciting enough, home theater projectors can give a whole new meaning to movies, television programs, or games. Projectors replace the ordinary TV with a much larger screen, flexibility to be moved around, and high-quality images.

Originally, these systems were only available for commercial entertainment or business uses, but now the technology is becoming more affordable for the average household, making it possible for everyone to enjoy a true cinema experience in the comfort of their own home. In addition to this, the cost per image area with a projector is actually much lower than the cost of a traditional TV.

When shopping for a home theater projector, there are a lot of technical things to consider that may seem overwhelming at first.

There are two types of projectors being made today, the DLP (Digital Light Processing) and the LCD (Liquid Crystal Display). Both of them have different benefits and limitations to consider.

DLP projectors use mirrors to project their images. They shine the light onto a chip with microscopic mirrors called the digital micro mirror device. Each mirror is one pixel of the projected image. That light is then reflected off of the mirrors and through the projector lens.

The LCD projector passes light through three LCD panels that are red, blue, or green. As the light is passed through those panels, the pixels can be either open to allow light through or closed off. The combining of open and closed pixels produces a wide range of colors that are projected as the moving image.

A projector with keystone correction features can adjust the image being projected so that it displays flat on the screen. For example, if a projector is angled down at the screen in front of it, the image would naturally be distorted into the shape of a trapezoid instead of a rectangle.

Either way, a projector needs to have one of these features.

Home theater projectors are more expensive than a normal television so they are not found as easily. Lower-end models can sometimes be found at department stores, while a smaller selection of higher-end models may be found at local electronic stores.

Typically, in order to get all of the specifications wanted, shoppers have to go through a home theater installation company that can order any type of projector. Unfortunately, installation companies often raise the prices of the projectors so that they get a higher profit.

Some people find it much easier to shop from home on websites like www.viralaudio.co.za where they can find all of the specifications they want and read the reviews of each projector before purchasing.

At Viral Audio we offer the best alternative methods of payment that will undoubtedly suit any consumer of quality home audio products.

All sound bars purchased from Viral Audio are transported and delivered for free. Viral Audio’s mission is to exceed your expectations in product matching and service delivery.